If you know anything about me, one of the things that probably stands out is that I am a class A klutz. Sometimes I even amaze myself, seriously! Since its been a while since my last post, I thought what better way to say "hello" than to share with you my most recent, "seriously, how did you ever make it to 31" umm...shall we call it experience?

I had just finished making laundry detergent (you did not misread that...yes I, Natalie, got my domesticated Pinterest on and made a lot of laundry detergent). I was standing in the living room talking with my sister when I shifted from one foot to the other. Now, this normally would go unnoticed...unless you are me. I didn't just shift. I shifted, lost my balance, stumbled, started to topple over, rolled/tweaked my ankle, and at after all was said and done I ended up in the kitchen. Much to my sister, Crystal's credit, she didn't laugh, but I sure did! I definitely know when I have something less than brilliant and have no problem laughing at myself!  Later my ankle hurt, but I think I was caught so off guard that laughing was my only response.

I think I should mention that I never actually fell, which is a feat for my in and of itself. I did, however, manage to give myself a soft tissue sprain. What is that exactly? I'm not really sure. I work for a podiatrist, so I assume he knows what he's talking about (he totally does) and that he wouldn't just make something up. Although, if he did, I would be the one to fall for it, but that's a whole other post altogether!

Thankfully, I don't need crutches and I can walk on it (I'm guessing that's where the soft tissue part of it comes in). I've definitely sprained this ankle way worse! What can I say? I am a hot mess and a walking disaster! I am the only person that I know who has dislocated both knees while sitting down and sprained an ankle while standing. I'd like to say its a talent that I've honed for the past say, oh I don't know, 31 years, but that just makes me sound like an over achiever!

I'm not one who typically writes down how I feel or what I think (i.e. journaling, diaries, heck even questionnaires), but I am also one who can't pretend everything is great if its not. Although, I am super easy to read and can't hide my feelings or emotions worth a crap, I never wanted to be the type of person who would just blog for the sake of getting a post out due to having a routine.

That is why I stopped blogging. 1-I think I just got overwhelmed with trying to keep up my blog, while working and volunteering, and if something had to give, it would naturally be my blog. 2-I was stuck. I didn't really know what to say and definitely wasn't inspired...not from a lack of blonde moments or cute clothes to share, but just tapped out. 3-I felt like somewhere along the way I lost my "voice." I can't tell you how many posts I have written over the past year that I have discarded because it didn't "sound" like me or I just felt like it was boring.

While I have been away, I have been thinking a lot about coming back to my blog (because sometimes I just miss it). I wasn't really sure what I wanted it to look like, didn't know what people would expect from me, and didn't know if I could put in the same amount of time and effort into it as I did before. I have come to realize that I can come back, even though its scary because so much has changed-in blogging in general and I have as well.

Its okay if I change some of the format of my blog and  choose not to put in the same amount of time and effort into blogging as I did before, and there is nothing wrong with that. I can blog when I feel like it and don't need to worry so much about you, the reader (although, you are awesome!), and the expectations that you may have for me or I have put on myself. I have been trying to figure out if I should come back or give up blogging altogether and lately I have had lots of different people refer to my blog or just plain asked me if I had a new one somewhere that I hadn't shared with anyone since I hadn't posted here in so long and I felt like that was confirmation that maybe I should come back and give it another go. I can't say that I will be super consistent with blogging, but I can say that I will at least make an effort to post stuff as it comes up, rather than writing a post in my head and doing nothing with it.

That being said here are some things that have been going on with me recently:

*My lovely high school girls have graduated and left the high school youth group coop! They are all in college now, which sounds totally weird, but I am really proud of them and miss them like crazy!!

*I am now working in the same grade as the Hubs in the junior class-and they are AWESOME!! They are so much fun, wonderful, crazy, goofy, loving, welcoming, and just all around great! I am really excited to share the next two years with them and build some great memories with them!

*Rubber bands can leave a bruise on your head. Its totally true. I have one on the back of my head at the moment from a really intense rubber band. Its kinda rocked my world because, frankly, I didn't know they could do that!

*I finally got a smart phone. Basically, this means my hubby now has a girlfriend, and her name is Siri. He talks to her ALL the time. The worst part is that Siri hates me. Like, really. She never does anything I ask. Jim can ask her to do something and she just does it, but she acts like she can hear me. Its ridiculous!

*I just got back from four days at Disneyland. By the end of day two I was threatening to elbow people in the face because I was tired of being jostled...could it be because I am now used to the small town-ness that is Salem, OR and less used to the over abundant amount of people in CA?! Its possible, but even if it was true, I doubt I would admit it! Moral of the story: two days at Disneyland is more than enough for anyone! :)

So, bear with me as I find my "voice" again and as I don't necessarily follow any set routine! :)

Why hello and welcome to another... 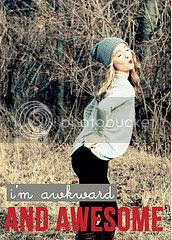 ~Trying to turn on your car while its actually already on...just makes for weird noises...

~ Receiving an adorable picture of your friend's son and verbally saying "aww!" and then clicking send...and sending her a blank text as your reply.

~Having your hubby hand you cash to hang on to, but you don't have any pockets...so you stick it in your bra {at church} and just pray that no one saw.

~Calling patients to remind them of their appointments and having to repeat yourself four times {each time yelling louder} and the cute older people still not able to hear you!

~Getting a sweet card and gift card from my work, just because :)

~Listening to some of our senior girls speak at youth group and rocking it out!

What are your awkward & awesomes this week?! Do tell!

Welcome to another {and the first in a while} Awkward and Awesome!

~The weather here has been all over the place {welcome to Oregon!}. Recently we had a ton of snow that just hit us what felt like out of the blue. As I was headed down the stairs to my car, I stepped onto the stairs that were piled with snow, and it was like riding down a slide {albeit, a painful slide}. My foot didn't even make a dent in the snow! I slid all the way down the steps with one leg underneath me at an awkward angle, all the while trying to catch my balance and the rail to slow myself down. It didn't happen. As I was dumping the snow out of my boot, I looked up to see a lady who was standing in the street {next to her car that was stuck in the snow} just staring at me. She didn't say anything! If I saw someone fall the way that I did, I would at least yell across the street to see if they were okay, but I guess that's just me!

~Going down the stairs at a friends house and tripping on them as I was going around the corner and making such a raucous that they thought I fell down the stairs...what can I say? I am nothing, if not dramatic. It keeps things interesting.

~Creepy old men who say horribly nasty things...definitely the first downside to my new job {I still love it though, no worries there!}

~Going to the post office, but getting there and realizing its not a normal post office, but one inside of another store. Then you sit in your car for ten minutes trying to figure out which door actually leads to the post office. In order to not look dumb {in case you walk into the wrong door}, you put your packages inside of your purse so that no one can see. As you get out of your car you realize that there is only one door and not multiple like you first thought...at least a good song came on while I was waiting!

~Getting a new job and I loving it!
~My hubby excited to see me writing a blog post
~The Voice and New Girl
~Hearing all of the awesome things that God did on the mission trips that our students went on over Spring break
~Going on vacation and after getting back having your friends tell you how much they missed you...because they missed all of the pinning you did when you were home!
~Having lunch with a friend